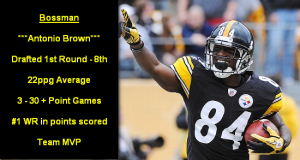 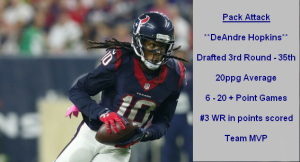 Throw the records out the window it’s playoff time and what a great way to kick off the 2015 playoffs then with a match up of two teams that have a combined 22 playoff wins, 4 championships and coming into the year had the two highest regular season winning percentages. Needless to say neither of these two teams are strangers to the post season and both teams have had to overcome injuries to get here. With all of that said only one time have these two teams actually met in the playoffs and that was in Super Bowl IX. Pack Attack defeated Bossman that day and will be looking for a similar result this week. For Bossman it has been well documented all of the injuries they have had to deal with and yet they don’t seem to miss a beat and for Pack Attack they lost arguably the most valuable fantasy football player in LeVeon Bell. Now that they both have made it to the post season who will be able to take that next step and win a playoff game? Bossman is on a roll having won 4 of their last 5 games and are the favorites heading into this match up. Let’s hope the game is as good on the field as it is on paper!

Check out the Yahoo predictions for this one. 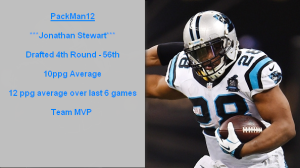 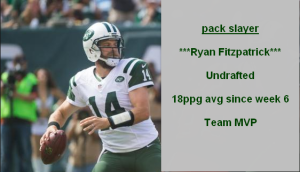 This match up features two teams who joined the league in 2011 and have had a great deal of success since that time. For PackMan12 they are currently the only team in the league who can say they have never missed the playoffs in any season and for pack slayer they have made the playoffs in 4 of their first 5 seasons. So despite the fact that these are young teams they both are no stranger to the playoffs. PackMan12 comes into this one riding a league high 8 game winning streak which means the last time they loss was over 2 months ago and for pack slayer they too finished strong to get into the postseason as after getting off to a 2-4 start they turned things around and 5-2 and had their best week of the season last game. Here is the big question though for both teams as we enter the post season is which one of them can take that next step and get to the big game and win it. pack slayer’s post season record is an abysmal 1-6 and even though PackMan12 has a 5-3 mark in the post season they have only reached the big game one time and that was in their rookie season. For either of these teams to get recognized with the Big Dogs they are going to need to not only win one playoff game but they are going to need to get to the Super Bowl and win it. Is this the year for one of these two teams?

Prediction:
So let’s take a look at the game and let’s start at the QB position. pack slayer had one of the better mid season acquisitions in Ryan Fitzpatrick as that was the turning point of their season, since picking him up their team has gone 5-3 and he seems to be getting better every week. For PackMan12 it is fitting that they would be “streaming” a QB for the first round of the playoffs given how their season has gone. So far this year they have started  4 different QB’s (Andrew Luck, Matt Hasselback, Josh McCown & Kirk Cousins) and now in the playoffs it looks like they will start their 5th new QB with Winston at the helm. And yet this team has not lost in two months?! So who has the edge? Well, I really like Winston given that the Saints D is soo bad right now but I just can’t pick a rookie QB in this one so I am going to go with the edge to pack slayer and Ryan Fitzpatrick however it wouldn’t surprise me at all to see Winston end up with the most points. Now to the WR group and this is pack slayers strength right now and really the area where if they want to go places in the playoffs this group is going to have to come up even bigger then they already have. PackMan12 has actually got decent production from their WR group especially the last two weeks but I don’t see them having enough firepower to keep up. pack slayer with the edge at the WR spot. Moving on to the RB position, where PackMan12 just suffered a huge blow with Mark Ingram suffering a season ending injury last week and pack slayer too recently lost their top RB to injury when Chris Johnson went down. There is really only one RB that I trust in this one and that is Stewart so I am going to give the edge to PackMan12. The TE position has been a game of musical chairs as well for both of these teams so this week in a do or die scenario they are going with Chandler and Walker. I am going to give the edge to PackMan12 and Walker. And lastly let’s look at the Flex position where PackMan12 is starting Dwayne Harris and pack slayer is going with Diggs tonight against Arizona. I will give the edge to Diggs as even though I don’t expect much for points. So who wins? I have no idea! Oh wait I guess I need to make a pick, I really don’t like any of these rosters this week so I suspect it will be a low scoring game and since I really don’t know I need to go with the team that has the most momentum coming in and go with PackMan12 to some how figure out a way to win just like they have all year.

Oh wait I forgot you need to be in the top 6 to get in the news! Maybe next year?