The playoffs are finally here! It has been a battle all season (unless you are U Don’t Know or PackMan12) who seemed to coast into the playoffs but other then that these teams have been battling all season to get the opportunity of a championship. HHH and BIGBOY! are the only two teams in this years playoff that have ever won a championship. So will we get a new champion? Or will HHH get their 3rd championship or maybe BIGBOY! repeats? It all starts this week, so let’s get to the previews.

Rapids Plungers is coming into the playoffs with huge momentum as they have won 7 straight games. These weren’t blowout games either. They have had to come back on Monday night or figure out ways to claw their way to victory when their team wasn’t playing all that well. The point being this is a team that is extremely battle tested. There is a huge asterisk next to this team and really there always has been. They are always in the running for the playoffs and usually always figure out a way to get to the playoffs but then something happens. I am not sue if the pressure gets to them or what it is but they are 1-11 in the playoffs. 1-11!! That is hard to believe but they will be hoping to get that monkey off their back this season! pack slayer has missed out in the playoffs the last two seasons and it took a strong finishing performance for them to be able make it in this season. However, their challenge like Rapids Plungers has been when they get to the playoffs they seem to play some of their worst football. Their playoff record is 2-8 so a little better but not by alot. These two teams combined playoff record is 3-19! So I guess I am kinda glad they are playing against each other because someone has to win! Now let’s figure out who that is going to be?

Prediction:
pack slayer got a huge boost for at least this week as they got Jaylen Samuels the now starting RB for the Steelers who however has TE eligibility! I have looked through every teams meetings and I has been saying all year how reliant pack slayer has been on Julio Jones and Matt Ryan. I still think those two players need to play well for them to win this game however I don’t think they need 30 points each anymore. Lindsay is turning into a star and Lamar Miller has been surprisingly good. Rapids Plungers is going to need their stars to perform and not lay another playoff egg. They need Brown, Luck and Hilton to show up and by that I mean they need 20 points from each of them this week! I expect this one to come down to the wire. I think pack slayer finishes with 130 points. Rapids Plungers goes into the Monday night game with 111 and Janikowski left to play. Janikowski has 15 points and pack slayer wins 130 to 127!

The defending champ, BIGBOY! is back in the playoffs and they are looking every bit like a team that is ready to defend their title. They started out the season slow but pulled off the trade of the season by getting Patrick Mahomes. Since then this team has looked every bit like a team that can repeat. Interestingly enough, outside of Patrick Mahomes they have another player that they drafted in the 14th round in James Conner that has also led their team this far. The big news however for this week is that Conner is going to miss this crucial game due to injury. That certainly will play a factor in this weeks game but can BIGBOY! overcome it? HHH started out this season red hot by winning their first 5 games but since then they have gone 3-5 but that hot start was enough to get them into the playoffs. This is an experienced team and has two championship runs under their belt so I expect them to come in here and play well against the defending champs. Can they play well enough to pull off the upset?

This is an interesting game to me. I have been bragging up BIGBOY! for weeks now as I think despite the records they have the most dangerous roster in the league. HHH has been less then impressive in getting into the playoffs and I don’t think anyone sees them as a favorite to even get out of Wild Card weekend with a win. That is what makes this game so interesting. Despite the fact this is the 4 vs 5 game and usually you would say this wouldn’t be an upset either way, I do think BIGBOY! comes into this as a heavy favorite. The loss of Conner really does hurt BIGBOY! and I think Mahomes has a tough game this week against Baltimore but Goff also faces a tough D in Chicago. It wouldn’t surprise me if HHH was able to knock off the defending champs however I don’t see it happening. I think BIGBOY! wins this one by 15.

Oh wait I forgot you need to be in the top 6 to get in the news! Maybe next year? 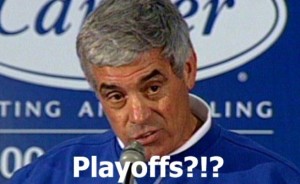