This one like usual is coming down to the wire. There are three teams that have all but solidified there spot in the playoffs which means with three weeks remaining there is an all battle for those final three spots! May the most deserving team win it!

You know some say that Fantasy Football is all luck and there are others that feel it is their superior intellect and knowledge of the game that allow them to do so well in fantasy football. I am here to tell you that there is truth to both sides of those arguments, however this week Bossman coach Steve Boss shows a prime example how good coaching and strategy can and will lead to W’s. Check out this next section as I document just that.

SETUP
Bossman had two starting WR’s on a bye this week which of course the coach of Pack Attack took notice and the game of cat and mouse ensued. I don’t normally write much about my game but this is a fun one (for Bossman anyway) so hang with me.

TRANSACTION – Nov 6: Bossman adds D. Thomas on waivers
Bossman needed a bye week fill in at WR and as of right now D. Thomas is that guy. Makes sense given that Pack Attack has Sam Darnold as their backup in the event that Brissett can’t play.

TRANSACTION – Nov 7: Pack Attack drops C. Davis and adds D. Jones
Pack Attack needed insurance at the QB spot because Brissett was questionable at best. They strategically waited until Thursday morning to drop C. Davis which meant he wouldn’t be eligible for pickup until Sunday morning. Pack Attack wanted to wait until Friday to drop him so he wouldn’t be eligible to play Sunday but the risk of losing out on Daniel Jones was too strong. The hope was that Bossman wouldn’t notice come Sunday and it wouldn’t be anything to worry about. Even though C. Davis isn’t anything special he was seemingly a better option than Bossman’s #3 WR and last thing you want is to see your opponent pick up a WR you just dropped and it leads them to a win.

Nov 7 – Nov 9 – Thoughts / head scratches / Scouring the weekly rankings
Why? Well…. Pack Attack didn’t love the thought of Z. Pascal at the flex with Hoyer likely throwing him the ball. One of the strong considerations that Pack Attack had been looking at was D. Slayton. So much that they had him added to the watch list and even made a note to check back on him after he cleared waivers. You will see why that is important later.

TRANSACTION Sat Nov 9: Pack Attack drops Sam Darnold
This was the plan all along but it was just to get a Defensive player so waiting until this late in the week wasn’t a big deal. Bossman like any good coach would do… took notice and whatever appeal D. Thomas may have had in their mind likely was lessened with this move.
Brissett was also ruled out which meant that Daniel Jones was the starting QB for Pack Attack this week.

TRANSACTION: Sun Nov 10 – Bossman adds C. Davis and drops D. Thomas
“Of course he did” was the thought going through Pack Attack’s head. All that they could hope for now is that C. Davis has a terrible game and this move turns out to help them.

TRANSACTION: Sun Nov 10 6:29AM Bossman drops C. Davis and adds D. Slayton
Pack Attack had recognized earlier in the week that Bossman had G. Tate which actually made them hope that R. Tannehill would be available vs Jones but he got snatched up by 16hrs. Never did it cross their mind that Bossman would actually consider starting two Giants WR’s. I mean come on.. it’s the Giants! However, the strategic play by Bossman is sound. Who else did D. Jones have to throw to? It was the reason that Pack Attack had Slayton on the watch list but ultimately decided to pass because they weren’t sure who to drop. What!? Who to drop!? This is a 4 win team.. there are people to drop! Come on Man! 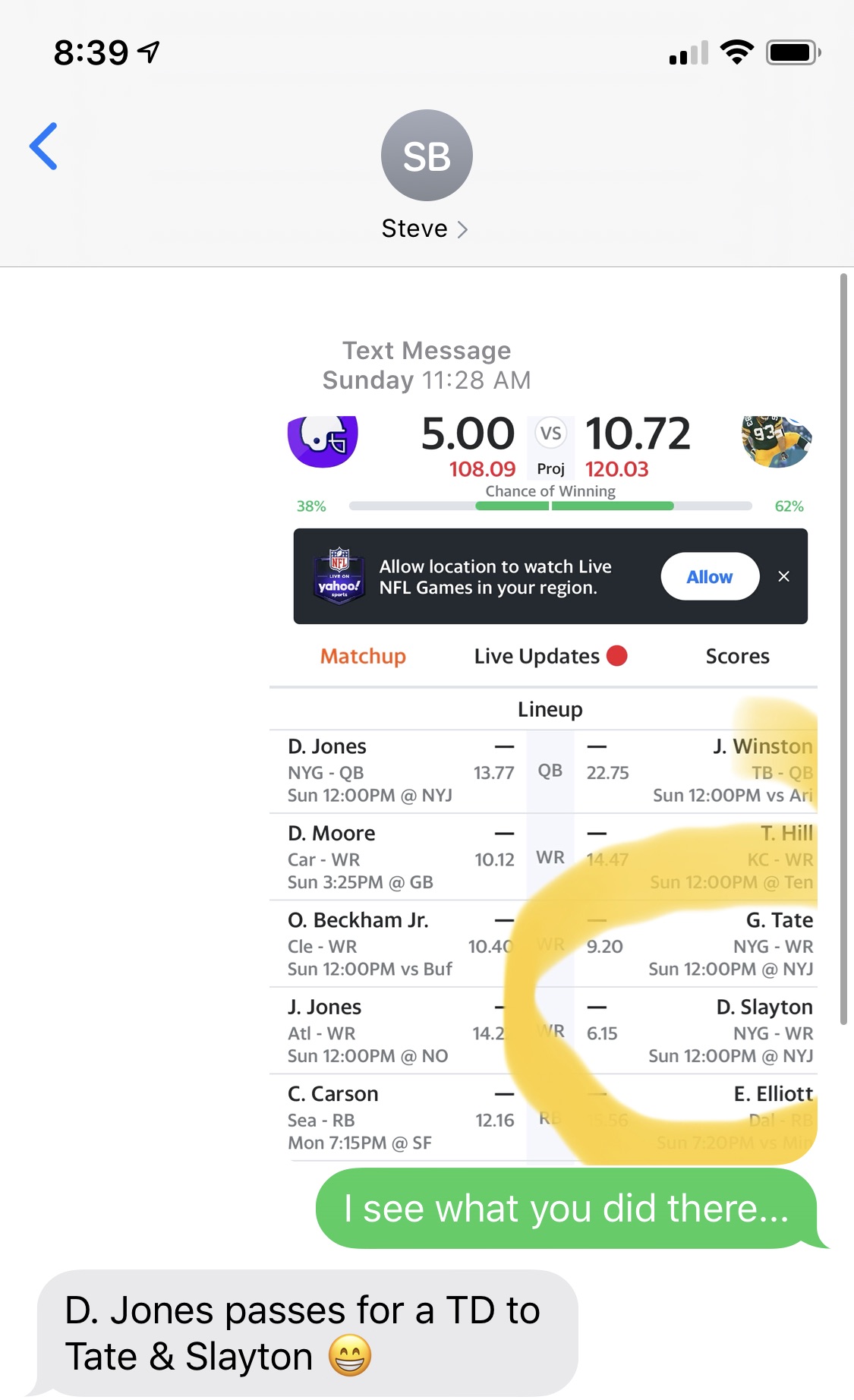 WHAT HAPPENED!?
Daniel Jones put up great #’s for Pack Attack by scoring 36 pts but as predicted by Bossman in the text above he threw 3 of those TD passes to Slayton and Tate. Slayton ended up scoring 33.05 points, C. Davis got hurt and had 0pts, Pascal scored 3 points for Pack Attack and Bossman won by 45!
This is about the best illustration I can show you of two coaches battling to win a game against one of their biggest rivals. Not to mention how strategically looking at your team and in some cases the team you are playing can help you win games. It is moves like that which make Bossman and their now 8-2 team a very close 2nd in my Power Rankings (if I had power rankings). Bossman has now won six straight games and if things continue a Super Bowl of Rapids Plungers vs Bossman would be one for the ages! Well done Bossman, well done!

So the rest of the recaps may seem a bit boring in comparison so I apologize. Here we go… Big Papa gets a huge win this week to move to 6-4 on the season. This was a big one as they not only got the win but they had their highest scoring week of the season which is equally important as they fight for a playoff spot. They have won three of their last 4 games and if they can start getting their offense clicking this is a team to watch out for. 16hrs got over 100 points for the first time in 4 weeks.. yes I know it was 1 point over but hey.. when you are 1-9 and trying to avoid last place you take any positivity you can find and that was about all that I could come up with! 🙂

Don’t look now but we have another team that is making some waves as we enter the home stretch. pack slayer is playing as good as any team right now and they have won 4 straight games. This week they all but ended BIGBOY’s season with a dominating, “look at me I am better then you” type of performance! pack slayer moved to 7-3 on the season and are along in 3rd place. I know that is not where they want to end up as they have their eyes on a first round bye. They don’t play either Bossman or Rapids Plungers these last three weeks so they are going to need some help if they are able to pull it off. For BIGBOY!.. well it was a good run but they better start figuring out other things to replace that trophy on their wall as it looks like there run may have just ended. They fall to 3-7 on the season.

Rapids Plungers is back… not that they really went anywhere but it was interesting to see how they would respond to their first loss of the season. They came back with a workmanlike win over DaUnderdog. They put up 149 points and moved to 9-1 on the season. Once again they did it with BIG performances and then solid contributions from most everyone (I am looking at you C. Kupp). This is what makes this team so incredibly dangerous is that they put up 149 points and one of their top performing players all season in C. Kupp didn’t score a point.  The win here also means that Rapids Plungers is the first team to clinch a playoff berth! DaUnderdog didn’t play a bad game but against a team like Rapids Plungers you need to play your best to have a shot at winning. The loss moves to 6-4 which keeps them right in the thick of the playoff race and if the season were to end today they would be the #5 seed. The bigger concern for this team right now has to be the status of T. Lockett who has been one of their better performers. His status might go along way towards determining how this season ends for DaUnderdog.

Every game is big when we get to this time of year but this one seemed to have a bit more significance for HHH given their upcoming schedule. They moved to 6-4 on the season and they should be favored to win the next two games (16hrs and Sportsfreak) and if they win those two it won’t matter what happens in their last game against Rapids Plungers which is pretty much the way you want it at this point! PackMan12 has got to be disappointed with this one as they fell to .500 on the season and are currently sitting on the outside looking in from a playoff perspective. They still control their own destiny from a playoff perspective but having lost 3 of their last 4 games is not helping me to feel confident that they can suddenly win three in a row.

Win! Win! PackerFANatic7 comes away with only their second win on the season and they did it in the exact way that you would expect a team that is hovering at the bottom of the league. They won while only scoring 86 points! 16hrs has got to be wondering what they need to do in order to get some of that luck but as it sits right now PackerFANatic7 can breathe a little easier knowing they doubled their win total! For U Don’t Know this one stings… A LOT!  They get a meeting with Bossman this week and then they close out against PackMan12 and 16hrs Ahead of You!! Technically they could lose two of those games and still get in but the reality is that they likely need to win both or if I were in their shoes I would be treating every game from here on out like a must win. This loss might be one that they look back on and determine kept them out of the playoffs. So for PackerFANatic7 there’s a positive for you… you may have just went to 1-0 on your progress towards playing the role of a spoiler!

Sportsfreak for the win! I am sure the thought that is going through their minds is finally!! They move to 3-7 on the season and yes their season is all but over from a playoff perspective (they haven’t been officially eliminated) but they have take pride in their team and playing until the end! Not to mention, they are going to take as many teams down with them as they go and well for teamAlaska this was a tough one! teamAlaska falls to 5-5 on the season and it sure doesn’t get any easier next week as they go up against Rapids Plungers and the week after they get the hot pack slayer team! Let’s just say if they figure out a way to make the playoffs now they will have earned it!

Have a great week everyone!