I am going to start this off by saying if I picked you to win this week I am sorry! With the exception of Bossman winning I missed on all of the other games. That just means that things are heating up and the playoff race is going to be fun to watch these last two weeks! Oh yeah.. and that I am not having much luck when it comes to picking the winners! 🙂

Things haven’t been looking really good for PackMan12 as they had lost 3 of 4 coming into this meeting with Pack Attack. This seemed like a prime bounce back spot for them but instead things got even worse and they now have lost three straight games. They are not out of the playoff hunt yet but after this performance it seems like just a matter of time. For Pack Attack sometimes it is better to be lucky then good and well this is not a very good team so I guess that makes them lucky! Both teams fall to 5-6 on the season and will have something to play for in week 12.

This was a huge win for HHH. When they looked at the schedule they had to know that Week 11 was going to be tough with their stars on a bye but they weathered that storm and actually had a really great week all things considered. The win moves them to 7-4 on the season and in great shape as it pertains to their playoff chances. On the other side of the ball, I spoke some positive into 16hrs team last week and look what happens. They have their worst week of the season and that’s saying something for a team that currently has only one win! I did receive a text from the GM and they wanted it known that Yahoo felt as though this loss was a fluke (see below). 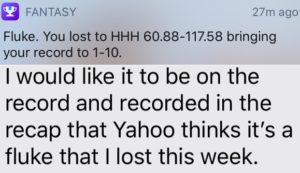 I tried 16hrs but it is seeming more likely then not that you my friend will be the recipient of the first ever “last place” award! Yes, there is two weeks left I know… so…. 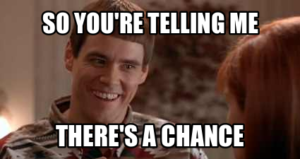 Big Papa with a HUGE win this week against their beloved son (Sportsfreak)! This game went pretty much how I had planned with the exception being I wasn’t expecting a 32 point performance from J. Brown. That was the difference maker in this one! The win keeps Big Papa in the thick of the playoff race and the loss pushed Sportsfreak into the last place conversation. With their upcoming schedule this was a must win for Big Papa. There is no question about it that right now Big Papa is playing as good as any team in the league. They have won three straight games and 4 out of their last 5. They have a tough last two games and more often then not 8 wins will get you in which means they just need to find a way to win one of them. The team lurching right behind them however is teamAlaska and teamAlaska holds the tie-breaker right now as they have scored more points. These two teams will likely be battling it out for that final playoff spot unless Big Papa can find a way to win their next two games and if they do… watch out for this team come playoff time! Sportsfreak fell to 3-8 on the season and what makes this even more frustrating for their coach is that they finished 3-10 last season. So in the past two years they have now won only 6 games! Those are the kind of things that can keep a person up at night!

Finally! PackerFANatic7 has got to be excited about not only getting win #3 on the season but also winning their second game in a row. Yes, it was against a fellow bottom feeding team in BIGBOY! however it is still against the reigning two time defending champ. I get to say that for just a couple of more weeks so I figured I would throw it in as much as possible for BIGBOY! to hear. These two teams don’t have anything to play for except for their pride and I would argue there is one more thing to play for. The consolation round. I know it is certainly not glamorous but if you finish in the last two spots you don’t even get into that “playoff” and well… that’s just embarrassing!

So close! No not this game but Bossman almost took over first place. Hill and Ekeler needed a combined 24.51 points in last night’s game to put Bossman into the top spot. Hill went down early to injury so it was all up to Ekeler and he almost came through. He finished with 20 points and the race for the top spot is officially open for business! Bossman put up 140 points this week despite their earlier mentioned top weapon in Hill going down in the first quarter. Bossman has now won 7 straight games and now somewhat control their own destiny as they no longer need Rapids Plungers to lose to take over the top spot they just need to continue to win and outscore them by 4.51 points over the next two games. Bossman clinched a playoff spot with the win but they have their eyes now set on that 3rd Championship trophy and with the way they are playing they are for sure one of the favorites. For U Don’t Know they fell to 5-6 on the season and they now have some major work to do and will need some help if they want a shot at the playoffs this season. Their schedule is such that I could see them winning the next two but I am not sure if that would be enough to get them in anyway. Regardless, they have something to play for with two weeks left in the season. They need to get the win next week and see what happens from there!

There were two games and teams that really stood out to me this week and the first one was DaUnderdog (7-4). It’s not the fact that they got the win because this was a team that had 6 wins coming in to pack slayer’s 7. To me it was the fact that they had two of their best players on a bye (Wilson and Lockett) this week and they still dominated the #3 seed in pack slayer. pack slayer (7-4) had come into this one having won 4 straight games and despite the loss they stayed at the #3 spot in the standings thanks to their points scored but they now share that same 7 win record with 3 other teams. Both of these teams will be in the playoffs barring some major turn of events but this was a statement game for DaUnderdog and it also put a huge damper on pack slayer’s shot at a first round bye! These two teams very well could meet come playoff time and if they do DaUnderdog will bring with them a lot of confidence. For some teams a loss like this can send them on a downward spiral but I am expecting that pack slayer picks back up in the next couple of weeks and gets themselves setup for a playoff run that they hope ends in a championship trophy!

The team that made the biggest statement this week was teamAlaska! This team started off crazy good with an almost 200 point week 1 effort but then they cooled down and then they heated up and then they cooled down and now they are hoping they heat up for the last two weeks of the season and into the playoffs. This was the win I was looking for from this team as their previous 5 wins were all against teams with losing records. Their upcoming schedule is difficult but this might have been the win they needed to gain the confidence to finish strong. For Rapids Plungers they fall to 9-2 on the season and I am not not concerned yet but let’s just say I am keeping an eye on this team. Kupp and Godwin have come back to life a bit from their torrid paces to start the season. This is still the team in the #1 spot and the team to beat in the playoffs but the stranglehold they once had on the “best team in the league” has dwindled considerably over the past three weeks. They get two potential playoff teams the next two weeks (Big Papa & HHH) so we will see rather quickly if this is a start of a fade for them or if just a mere rough patch and they get back to their dominant ways!

That’s it for this week everyone. Have a great week!